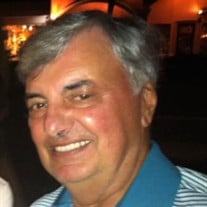 Naples, FL – Thomas A. Tucker, 78, passed away peacefully on January 17, 2021 in Naples, FL. Tom was born on September 4, 1942 in Hazleton, PA to Henry and Virginia Tucker. Tom was raised in Hazleton where he graduated High School in 1960 and then joined the United States Army National Guard. After completing two years at Pennsylvania State University, Tom was hired by IBM in 1963 and moved to Poughkeepsie, NY where he completed his education in engineering and mathematics at Marist College. After 30 years with IBM, Tom joined Sungard in Philadelphia and relocated to Mount Laurel, NJ until his retirement to Naples. Tom and Geneva, his loving wife of over 55 years, enjoyed a lifetime of wonderful friends and memories in Poughkeepsie, Mount Laurel and Naples. Always an avid sports fan, Tom played competitive softball and basketball as a young adult, but was most fond of golf – enjoying countless rounds with Geneva and his many lifelong friends, while recording four hole-in-ones along the way. Tom will always be known for his booming laugh, big smile and kind heart. He was always there to support or help a friend in need. He cherished the time that he spent with his children and grandchildren – especially at the New Jersey shore or the beaches in Naples. Tom is survived by his wife Geneva Tucker; son Bob (Caren) Tucker; daughter Jennifer (Jason) Schwarz; grandchildren Casey, Jake, Ryan and Brooke and his younger brothers Bob and Hank. The family is planning a celebration of Tom’s life to be held in the Northeast later this year. If you would like to make a gift in Tom’s honor, please consider a donation to the Making Headway Foundation, 115 King Street, Chappaqua, NY 10514 – Making Headway – Making Headway.

Naples, FL &#8211; Thomas A. Tucker, 78, passed away peacefully on January 17, 2021 in Naples, FL. Tom was born on September 4, 1942 in Hazleton, PA to Henry and Virginia Tucker. Tom was raised in Hazleton where he graduated High School in... View Obituary & Service Information

The family of Thomas A. Tucker created this Life Tributes page to make it easy to share your memories.

Send flowers to the Tucker family.