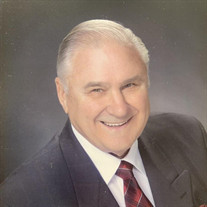 Theodore (“Ted”) Anthony McWilliams passed away on April 18th in Naples, Florida with his wife of 58 years, Anne Potter McWilliams, by his side, a month shy of his 92nd birthday. He was born May 24, 1930 in Danville, PA. After moving to Pittsburgh, Ted attended Saint Joseph School, Central Catholic High School and graduated college from the University of Pittsburgh in 1952 with a degree in business administration. Ted served in Korea as a First Lieutenant in the United States Airforce until 1953. He began his business career with New York Life Insurance Company. He was truly a self-made man with a strong entrepreneurial drive, entering the automotive industry with a used car lot on Baum Boulevard in 1963. He grew the business into one of the largest, multi-point, multi-franchise dealerships in Pennsylvania over a 50 year career. Along the way, he expanded his interests into commercial and residential property development in Pittsburgh, PA and Ocean City, NJ. Ted was honored in 2008 with an induction into the Central Catholic High School Hall of Fame. He was recognized as an outstanding alumnus for his generosity, through donations made from the McWilliams Family Foundation, providing many young men the opportunity of a life-changing education, as was provided to him during his time at Central Catholic. Ted also served on the Board of Directors of Divine Providence Hospital, the Abraxas Foundation, and The Pittsburgh Auto Trade Association. He has also been a member of the (NAMI) National Alliance on Mental Illness of Southwestern Pennsylvania since 1985. Ted enjoyed spending time with his wife, children and grandchildren, and was known for his “larger than life” personality. He continued to love to teach “life lessons”, and constantly pursued learning and achieving. Ted got great pleasure from his friends in Naples, FL and visitors from his earlier life. Ted is survived by his wife, Anne Potter McWilliams; his sons Theodore Patrick McWilliams of Orlando, FL, and Michael Scott McWilliams of Pittsburgh, PA; and his daughter Debra McWilliams McLaren of Rowayton, CT; his four grandchildren: Brandan McWilliams, Ashley McLaren, Morgan McLaren and Lachlan McLaren. Final arrangements were made by the Beachwood Society of Naples, FL. A service will be held privately in keeping with Ted’s wishes.

The family of Theodore Anthony McWilliams created this Life Tributes page to make it easy to share your memories.

Send flowers to the McWilliams family.