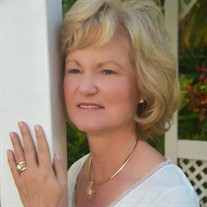 NAPLES, FL-- Suzan Holobaugh Bergland, 70, of Naples, died May 19, 2021, after a short illness. Born September 23, 1950, in Charlotte, NC, she was the daughter of the late Margie Segraves Holobaugh and the late Palmer Grey Holobaugh of Moore, SC. A graduate of Furman University with a BA degree in Music, she received a Masters of Music degree from Converse College. Suzan taught middle school band for several years before making a career change into industry. In 1996 she received a Masters degree in Quality Management from Loyola University in New Orleans. Her career continued in the areas of business efficiency and strategic management, where she co-founded TOC Solutions, LLC and served as the President of the North America Group of AGI-Goldratt Institute. Following her retirement in 2013, Suzan completed the Greater Naples Leadership (GNL) Master Class and served on the GNL Board in multiple capacities. Suzan was vice president of the Music Foundation of Greater Naples, an organization that promotes music education and performance and provides scholarships for students. Suzan enjoyed playing the flute regularly at both Trinity-by-the-Cove Episcopal Church in Naples and the Episcopal Church of the Holy Spirit in Mars Hill, NC. In addition to being a talented flutist, Suzan loved ballroom dancing and golfing with her husband and was known for being a caregiver and a loving wife, mother, grandmother, aunt, mentor, and friend. Suzan was predeceased by her husband Glenn David Bergland of Naples; her stepson, Matthew Bergland of Libertyville, IL; and her sister, Sharon Holobaugh Burch of Moore, SC. Surviving are her daughter, Holly Elizabeth Shanley of Oakland, CA; her stepdaughter Kara Bergland of Libertyville, IL; her stepson, Eric Bergland and wife Frances of Redwood City, CA; and grandsons Spencer and Ryan Bergland. A memorial service will be held at 1pm on Tuesday, May 25, 2021, at Trinity-by-the-Cove Episcopal Church in Naples. The service will be live streamed through the church’s website. In remembrance of Suzan, memorials may be made to the Music Foundation of Greater Naples, online at https://musicfoundationnaples.org/?p=9089 or via mail at P.O. Box 112383, Naples, FL 34108.

NAPLES, FL-- Suzan Holobaugh Bergland, 70, of Naples, died May 19, 2021, after a short illness. Born September 23, 1950, in Charlotte, NC, she was the daughter of the late Margie Segraves Holobaugh and the late Palmer Grey Holobaugh of Moore,... View Obituary & Service Information

The family of Suzan Bergland created this Life Tributes page to make it easy to share your memories.

Send flowers to the Bergland family.