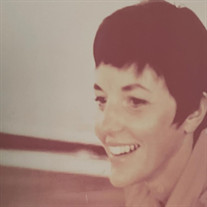 Shirley W. Hitchcock passed away Monday, January 10, 2022. Born to May and Charles Watkins on March 29, 1936 in Valley Stream, Long Island, Shirley grew up with her 2 sisters, Catharine and Linda, in Rockville Centre, Long Island. Shirley attended South Side High School in 1954, where her future husband, Charles Hitchcock, was a classmate. Shirley dated older men at the time so Charles was not on her radar quite yet. On to Mary Washington College and then straight to Wall Street where Shirley was executive secretary at Dillon & Reed Co. Shirley was known to turn heads as a platinum blonde one week, and a brunette the next. Shirley and Charles met up again, married in 1961 and have two children, Elizabeth and Jonathan. After moving around the country over the years, they eventually landed in Vermont in a log cabin they had built, where Shirley’s green thumb thrived. After vacationing in Naples in 1986, they became snowbirds for a few years and then full time. Why leave snowy cold Vermont? Because Shirley decided at the age of 52 to go to nursing school. Upon Shirley’s mother passing, (May was head of the EKG and EEG Dept of South Nassau Community Hospital) she was inspired and became an LPN and worked at Bentley Village until her retirement at age 63. Shirley loved nursing and was very popular with residents. In retirement, Shirley took up golf and enjoyed playing with her gal pals at the Glades Country Club, where she also volunteered. A talented watercolorist, the family is fortunate to have many paintings of Shirley’s artistic gift. Shirley is survived by husband of 60 years, Charles Hitchcock, daughter Elizabeth (Patrick Murray), son Jonathan (Carol Hitchcock), and grandchildren Alexandra, Austin and Logan, whom she was so proud of, Shirley’s sister Linda (Roger Kenny), brother-in-law George (Carol Hitchcock) and many nieces and nephews. ***IN LIEU OF FLOWERS and to honor Shirley, please contribute to the Alzheimer Association act.alz.org/site/donation or Avow Hospice avowcares.org *** The family wishes to thank the wonderful team at Restoration Senior Living in Naples and the amazing Avow Hospice Nurses.

The family of Shirley Hitchcock created this Life Tributes page to make it easy to share your memories.

Send flowers to the Hitchcock family.