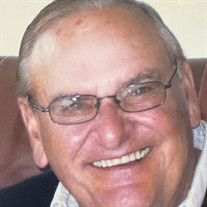 Richard (“Dick”) Burton Tyler (1943-2021), 78 years old, of Fort Myers Beach, Florida passed away peacefully on April 28, 2021 after a short battle with a heart infection. He was proceeded in death by his parents, Wayne Tyler and Kathryn (Gerhart) Tyler, and his infant sister, Jane Anne. Throughout his life, Dick lived in many places across the country, including Maryland, New York, Iowa, Illinois, California, and Florida. He graduated from North Central College in Naperville, Illinois with a bachelor’s degree in Business. One of his proudest accomplishments was building a successful car dealership, Ames Datsun Lincoln-Mercury, in Ames, Iowa in 1975-1984. Dick always loved cars, especially Corvettes, and hand-washed and waxed his vehicles regularly. He also loved playing golf and cards. In his retirement years, he liked to build thousand-piece, to-scale models of ships and doll houses which he donated to area charities for their fundraising auctions. Dick was an animal lover and a generous philanthropist who donated financially to dozens of charities. He is survived by his wife of 51 years, Flora Tyler; daughter, Katy Tyler Weeks; son-in-law, Jeff Weeks; and grandchildren Ben and Kelly Weeks. The family requests memorial contributions be made to the Humane Society or the Ronald McDonald House.

The family of Richard Tyler created this Life Tributes page to make it easy to share your memories.

Send flowers to the Tyler family.