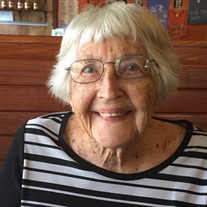 Mary N. Keith, 103, passed away peacefully on April 6, 2021, at the Carlisle in Naples, Florida. She had been a Naples resident since 2004 after having lived in Pfafftown, North Carolina for 30 years. Preceding her in death was her husband, William H. Keith, and her daughter, Sally Keith Mauney. Mary was born on November 4, 1917 in Chicago. Illinois, a twin daughter of Arthur Robert and Florence Mary Nordlie. She attended Miami University in Oxford, Ohio. She met her husband at a USO dance while Bill was in boot camp at the Great Lakes Naval Station at the beginning of World War II. Some of Mary's favorite memories growing up was spending the summers swimming and playing cards with her sisters at the family summer home in Sister Lakes, Michigan. Mary was an avid and accomplished bridge player. She had a love of the water and was in aquatic classes at the YMCA well into her 90's. Mary was an optimistic and positive person and had a warm and ready smile for anyone she encountered. She is survived by her daughter, Carolyn (Steve) Logan of Denver, Colorado; her son, William (Jill) Keith of Naples, Florida; son-in-law, J. Robert Mauney of Spartanburg, South Carolina; grandsons Jay and Jonathon Logan, William and Robert Keith, and granddaughters Lauren Keith Everett and Julie Mauney Young; and great grandchildren, William and Clara Young and William Valentin Keith. The family would like to thank Mary's caregivers at the Carlisle, Just Like Family and Avow Hospice for their care and kindness. A family celebration of life is being planned for a later date. Inurnment will be with her husband and daughter in the family burial plot at Forsyth Memorial Park in Winston-Salem, NC.

Mary N. Keith, 103, passed away peacefully on April 6, 2021, at the Carlisle in Naples, Florida. She had been a Naples resident since 2004 after having lived in Pfafftown, North Carolina for 30 years. Preceding her in death was her husband,... View Obituary & Service Information

The family of Mary Keith created this Life Tributes page to make it easy to share your memories.

Send flowers to the Keith family.