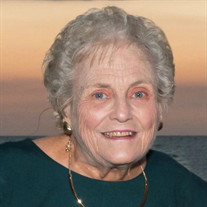 Mary Ann Eytel, of Naples, passed away peacefully surrounded by her family on Monday, June 14, 2021. Born September 5, 1937 in Livingston, New Jersey. Mary Ann graduated from Grover Cleveland High School in Caldwell, New Jersey (1955) and went on to obtain her nursing degree from St. Mary’s School of Nursing (1958) in Orange, New Jersey. Mary Ann began her nursing career as a Registered Nurse at Dartmouth Mary Hitchcock, Dartmouth, New Hampshire, specializing in pediatric nursing. She held numerous nursing positions over her lifetime, but the one she cherished the most was working in her husband’s Naples medical practice. In 1959, she married the love of her life and high school sweetheart, Charlie who was completing his first year of medical school at Dartmouth College. After Charlie was commissioned into the Navy, he and Mary Ann, lived in San Diego, Guam, Philadelphia and Jacksonville, FL. In 1971, after Charlie left the Navy they moved their family to Naples, Florida. Mary Ann was active in the community, she served on NCH’s Hospital Auxiliary, the Collier County Medical Society Auxiliary where she served as president. She was a member of the Gavel Club. She was the “Cookie Mom” for collier county, storing all the girls scout cookies in her garage. She never missed a sporting event to cheer on her kids. She coordinated the football game programs for both the PAL Gators and the NHS Golden Eagles. In addition to her love of family, she also enjoyed knitting, reading and spending time with her family and friends. Wife, Mom, Nana, Sister, Aunt, Nurse and Friend, she will be missed by many. She was preceded in death by her loving husband of 60 years, Charles Stanley Eytel in 2019. Her parents, William Joseph Vogel, Jr and Marietta Albers Vogel Klug, her brother, Bill Vogel and her sister Kathy Quinby. Mary Ann loved her family more than anything. She is survived by her five children, Cheryl Snyder (Rick), Denise Porter (Larry), Donald Eytel (Amy), Lori Langley (John), Michael Eytel (Kim), 15 grandchildren; Jessica, Jenni, Christina, Stephen, Lisa, Ashley, Michael, Chelsea, CJ, Cassidy, Emily, Katie, Annie, Avery, and Ashton, eight great-grandchildren; Rachel, Rosa, Trinity, Ford, Crosby, Fox, Cavis and Colette (due July 2021), and numerous nieces and nephews. The family would like to thank all the doctors and nurses, that have cared for Mary Ann over the years. A special thanks goes to Dr. Irani, Katherine, RN (NCH 4N) and AVOW Hospice. A Celebration of his Life will be held at a later date. In lieu of flowers, contributions may be made to the American Cancer Society in memory of Mary Ann Eytel.

The family of Mary Ann Eytel created this Life Tributes page to make it easy to share your memories.

Send flowers to the Eytel family.