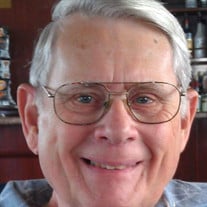 Kenneth Earl Hart passed away at AVOW Hospice on August 11, 2021. He was born June 7, 1936 in Baltimore, MD to Otis J. and Viola B. (nee Trimyer) Hart of Virginia. He was the youngest of 4 siblings: sister Eunice E. Burroughs of Venice, FL, brother Norman O. Hart (who preceded him in death) of Baltimore, MD and brother Donald L. Hart of Birmingham, AL. Kenneth E. Hart of Naples, FL was the beloved husband of Sandra L. (nee Stark) Hart (who preceded him in death) for 40 years. He was father to Cheryl L Hart of Charlotte, NC and Jeffrey A. Hart of Conifer, CO. He was stepfather to Deborah L. Grogan of Naples, FL. He was grandfather to Caitlyn B. Grogan and Erinne M. Grogan of Naples, FL and Jeffrey A Hart Jr. and Jeremy M. Hart of Conifer, CO. He was great grandfather to Arabella Grace Brown of Naples, FL. Kenneth grew up in Baltimore and graduated from Baltimore Polytechnic Institute. Just after high school, Ken enlisted in the US Navy at the age of 17. He received honors for completion of the US Naval School, becoming a Radarman Class “A” and eventually became Radarman Second Class in charge of the ship’s Combat Information Center. He was active from May 1951- June 1957. Following his time in the Navy, Ken married his sweetheart Carolyn J (nee Lynn) Hart in Long Beach, CA and they moved back to Baltimore where they had daughter Cheryl. Carolyn died of heart complications not long after, leaving Ken as a single dad. Ken was working at Bendix Corp in Baltimore where he met Nona Wertz. He remarried and they had a son, Jeffrey, in 1967. He was transferred to Fort Lauderdale, FL for a year with Bendix but decided to move back to Baltimore to complete his degree in Mechanical Engineering from Johns Hopkins University, after which he started working for Westinghouse Electric Corporation. Ken and Nona were divorced in 1973. While working at Westinghouse, Ken met his lifetime love Sandra Hart. Ken worked for Westinghouse for 30 years. After Ken retired in 1999, he and Sandy moved to Venice, FL and in 2003 they settled in Naples, FL. They were both active members of their church, First Baptist in Naples, and were part of the Bible Life Group and served as greeters before services. They also enjoyed full lives with friends and family, enjoyed eating out and traveling. Kenneth will be interred alongside Sandy at Moreland Memorial in Parkville, MD. There will be a memorial and reception at First Baptist Church Naples on August 28th at 11am. A second memorial will be planned at Moreland Memorial on their anniversary weekend of Oct 9th, 2021. In lieu of flowers, please consider a donation to Avow Hospice or First Baptist Church, Naples.

Kenneth Earl Hart passed away at AVOW Hospice on August 11, 2021. He was born June 7, 1936 in Baltimore, MD to Otis J. and Viola B. (nee Trimyer) Hart of Virginia. He was the youngest of 4 siblings: sister Eunice E. Burroughs of Venice, FL,... View Obituary & Service Information

The family of Kenneth Hart created this Life Tributes page to make it easy to share your memories.

Send flowers to the Hart family.