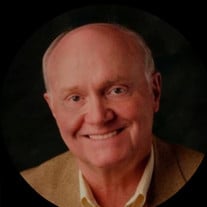 Jerry Lee Grace, Age 79, passed away peacefully in his home Sunday morning January 24, 2021. Jerry was born in Cincinnati to Beatrice (Van De Mark) and Robert Grace on June 30, 1941. Jerry is survived by his wife Lynn (Brinkman) Grace, son Christopher Grace of Hilton Head, daughter-in-law Stephanie (Lubitz) Grace and two grandchildren, Reilly and Evan Grace of Cincinnati, brothers and sisters in law Scott and Donna (Wissman) Brinkman of Louisville, Michael and Susan (Brinkman) Hyzdu of Cincinnati and Naples, Carla Sommer Fink of Smyrna, cousin in law Sally (Wells) Van De Mark of Birmingham, Michigan, Six nieces and nephews and seven great nieces and nephews. He is preceded in death by his cousin William Van De Mark, and father and mother-in-law Frank and Janice (Eiting) Brinkman. He graduated from Indian Hill High School in 1959, Ohio Weslyan in 1963 and Masters from the University of Cincinnati in 1966. Jerry began his career at Giard Trust Bank of Philadelphia. After finishing graduate school, he worked for Proctor and Gamble in the Finance Division. He was soon called to part of the investment world and started to work at E.F. Hutton. Several years later he helped to start McCloy Watterson. He then moved to McDonald & Company, and later to Kidder Peabody until he joined Provident Bank as the SVP, Treasurer and CFO until he retired in 1998. Jerry was active in both Cincinnati and Naples Communities. He belonged to the Banker’s Club, Queen City Club and Stock and Bond Club. He was an Ohio Commodore and Grand Commodore in 1989. Jerry served as Chairman of the Board at Talbert House in Cincinnati, Board Member of The Horticultural Society, Sister City Project of Ukraine, Board Member at UCATS at the University of Cincinnati, Minor League of Naples and Treasure of the Naples Opera. Jerry was also a member of the North Naples Rotary Club and Life Loyal Sigma Chi. Jerry was an avid golfer and had the good fortune to play on three continents. He belonged to Coldstream and Kenwood Country Clubs in Cincinnati, Grey Oaks and Imperial Country Club in Naples. He also belonged to Cordierlla in the Vail Valley. Jerry’s other passions were traveling to 85 countries with his wife Lynn, photography, writing and watching his Granddaughter Reilly perform on stage. A Private Memorial will be held at a later date. In lieu of flowers, Memorials can be made to the Talbert House 2600 Victory Parkway Cincinnati, OH 45206 and AVOW Hospice 1095 Whippoorwill Lane Naples, FL 34105.

The family of Jerry Lee Grace created this Life Tributes page to make it easy to share your memories.

Send flowers to the Grace family.