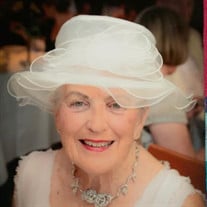 Janet Theresa (Cotter) Rouen, 84, went to Heaven on October 19, 2021, surrounded by her children in Naples, FL. Janet, the eldest of three daughters, was born to John & Margaret (Spring) Cotter in Syracuse NY. She graduated from St. John the Baptist High School in 1955 and went on to obtain her Bachelors in Education from her beloved Le Moyne College in 1959. In 1961, Janet married her husband Thomas, and they resided in Syracuse, raising their family until 1984 when they relocated to Camp Hill, PA. In 2012 they retired to Naples, FL. Janet was a loving wife, mother, and wonderful grandmother. Always a lady, Janet had a boundless spirit for her family and friends. She possessed an incredible entrepreneurial drive, which lead her to a successful Real Estate career in Camp Hill, PA. A born adventurer, Janet loved to travel, and built a lifetime of experiences all over the world. Later in her life, she and Tom started taking voyages on the Queen Mary, which they enjoyed immensely. Janet was a member of St. Agnes Catholic Church, Naples, and was predeceased by her husband Thomas in 2015, son Robert Francis and sister Mary Margaret. She is survived by her three children: Thomas Jr. (Tina) of Chicago, IL, Alison Rouen of Fairfield, CT, and Caroline Dixon (Douglas), of Syracuse, NY. Her four grandchildren were the light of her life: Micaela, Aubree & Lore Dixon, and Abigail Rouen. Sister Sharon Wilcox (Hank), several nieces and nephews. A funeral mass will be celebrated in summer 2022 at St. John the Baptist Roman Catholic Church in Syracuse where Janet and Tom were married. In lieu of flowers, donations in her memory may be sent to Le Moyne College Scholarships at www.Lemoyne.edu/give (or) Le Moyne College Office of Advancement P.O. Box 527 Syracuse, NY 13214.

Janet Theresa (Cotter) Rouen, 84, went to Heaven on October 19, 2021, surrounded by her children in Naples, FL. Janet, the eldest of three daughters, was born to John & Margaret (Spring) Cotter in Syracuse NY. She graduated from St. John the... View Obituary & Service Information

The family of Janet Theresa Rouen created this Life Tributes page to make it easy to share your memories.

Send flowers to the Rouen family.