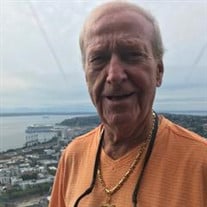 James W. Skinner, Jr. of Ocean, NJ and Naples, FL was born in Jersey City, NJ on April 18, 1938 to parents Helen and James Skinner. At the age of 17 1/2 he joined the United State Marine Corp for a period of 2 years to proudly serve his country. He then worked for Swift and Company and UPS for many years. He retired and went on to own several bars and restaurants. He was predeceased by his wife of 47 years Dolores (Leinweber) Skinner in 2010. In 2014, he married Patricia (Malloy) Skinner on the island of Kauai, Hawaii. James is survived by his daughters Jacklyn Skinner Scales, Neptune, NJ; Sandra (Andrew) Scott, Redding CT, and his son James (Gabriella) Skinner, Hazlet, NJ. Also, grandchildren Christopher (Emily) Scales, Little Silver, NJ; Michael Scales, Hoboken, NJ; Samantha and Jake Skinner, Hazlet, NJ, and Matthew and William Scott, Redding, CT. Great granddaughter Annabelle Scales He was predeceased by Brother Eugene Skinner and sisters Sally Canzano, Helen O’Brien and Rose Murphy. He is survived by Brothers Robert Skinner, Westwood, NJ; Raymond (Joyce) Skinner, Kearny, NJ; sister Grace Cuttingham, Jersey City, NJ. In addition, his best friend and brother-in-law William (Donna) Leinweber, Brick, NJ, sister-in-law Linda (Terry) Higgins, Point Pleasant NJ and several cousins, nieces and nephews. James owned several thoroughbred horses and looked forward to his yearly trips to Saratoga. He loved going to Atlantic City while in NJ and playing bocce and riding his bicycle for miles every day in Naples. He spent many wonderful years with his family in their home in Long Beach Island, NJ. In recent years, Jim and Patti took several “bucket list” trips including an Alaskan cruise, Nashville, San Diego to visit Del Mar Horse Racing Track and last but not least the Kentucky Derby! He was also a member of the Point Pleasant, NJ Elks. Last but not least, he enjoyed his daily breakfasts with the crew at Mike’s Deli in Wall, NJ. James will be remembered as a generous and amazing husband, father, grandfather, great-grandfather, uncle and friend to many who had the privilege of knowing him. He was looking forward to following the college baseball careers of Matt and Will. He will be sorely missed by all. Donations in James name should be made to the Wounded Warrior Project @ woundedwarriorproject.org A Celebration of Life will be held at at later date.

James W. Skinner, Jr. of Ocean, NJ and Naples, FL was born in Jersey City, NJ on April 18, 1938 to parents Helen and James Skinner. At the age of 17 1/2 he joined the United State Marine Corp for a period of 2 years to proudly serve his country.... View Obituary & Service Information

The family of James Skinner created this Life Tributes page to make it easy to share your memories.

Send flowers to the Skinner family.