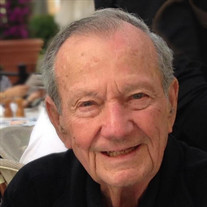 Jack Edward West passed away surrounded by his family on August 21, 2021 at the age of 93. Jack was born in Kansas City Missouri on July 11, 1928 to Ura and Delores West. He was preceded in death by his parents, his loving wife of 61 years, Phyllis Jeanne West (Lapides), sister Mary Jane Manty (West) and brother James West. Jack attended Paseo High School in Kansas City, enlisted in the Marine Corp at the age of seventeen, and was stationed at Pearl Harbor. After returning home he began his career at Grinnell Company, where he worked for forty years, beginning as a salesmen and working his way up the corporate ladder to become the branch manager in Chillicothe Ohio, and Minneapolis Minnesota, the largest branch in the country. For pleasure Jack loved boating and had boats on Lake Erie, the St. Croix River, and at his home on Lake Minnetonka in Minnesota. In 1989 Jack and Phyllis retired to Naples Florida, where Jack became an avid tennis player. He was member of The Longshore Tennis Club for over thirty years and won local, state and national championships. His friendly and outgoing personality was evident as an usher and greeter at First Presbyterian Church of Bonita Springs, where he was an active member. Jack will be remembered by all for his quick wit and joking manner, as well as his love of a good bargain. But most of all Jack loved his family. Jack is survived by Holly West Jones (Walt) and Jack (Skip) Edward West Jr. (Cheryl). He was lovingly called “Pops” by his four grandchildren, Win Jones (Julie), Elisabeth Jones Reed (Michael), Taylor West and Carly West, and three great-grand children, Clara Jones, Madeline Reed and his namesake, Jack Jones. Jack had a long and happy life but his last few years were challenging. Alzheimer’s disease was robbing him of the robust life he cherished, and those that loved him, of the man we remember. Thankfully, at the end of his life he knew the family that was with him, and felt secure in their love. We all adore him and will miss him greatly. Private burial will be held in Kansas City, Missouri. Memorials preferred to the Alzheimer’s Association.

Jack Edward West passed away surrounded by his family on August 21, 2021 at the age of 93. Jack was born in Kansas City Missouri on July 11, 1928 to Ura and Delores West. He was preceded in death by his parents, his loving wife of 61 years,... View Obituary & Service Information

The family of Jack West created this Life Tributes page to make it easy to share your memories.

Jack Edward West passed away surrounded by his family on August...

Send flowers to the West family.