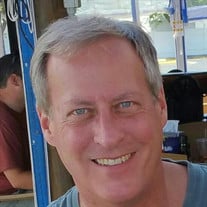 Hugh Franklin Bennett was born on March 7, 1957, and passed away on September 27, 2021 in Naples FL, after battling ALS for nearly a year. Hugh grew up in Houston, Texas, and Greenwich, Connecticut and was well travelled. He attended the Kinkaid School in Houston and is a graduate of the Greenwich Country Day School, the Deerfield Academy, and the University of North Carolina at Chapel Hill, where he received a bachelor’s degree in history and political science. The first part of Hugh’s career was spent in the investment banking industry, where during the course of 20+ years he worked for The First Boston Corporation (now part of Credit Suisse), Advest (now part of Merrill Lynch/BofA), McKinley Allsopp, and Gagan, Bennett & Co. In these positions he worked on financings, mergers/acquisitions, and business valuations, and specialized in the technology, telecom, biotech, and plastic manufacturing industries. Hugh then spent over 13 years at the Massachusetts Institute of Technology’s Office of Resource Development, retiring in 2019 from the role of Associate Director for Prospect Identification in the Office of Development Services, in which he served as a prospect research expert for MIT’s major gifts program. Hugh also served on the boards of trustees/directors of non-profits and corporations, both privately owned and publicly traded. Hugh was an avid soccer player and coach, and a big fan of the Houston Astros and college basketball, as well as enjoying a round of golf. Also a music lover, Hugh often listened to the Grateful Dead, among others. He was renowned for his droll sense of humor and his mastery of the art of punning. He was a devoted husband and father and a dedicated and tremendously valued friend and colleague in all his endeavors. To say that he will be deeply missed is very much an understatement. He is survived by his loving wife Michelle, who was constantly by his side, his children Victoria and Matt, her children Kyle and Tyler and grandchildren Sophie and Madelyn, and his brothers and sister Win, Philip and Frasier and nieces and nephews.

Hugh Franklin Bennett was born on March 7, 1957, and passed away on September 27, 2021 in Naples FL, after battling ALS for nearly a year. Hugh grew up in Houston, Texas, and Greenwich, Connecticut and was well travelled. He attended the Kinkaid... View Obituary & Service Information

The family of Hugh Bennett created this Life Tributes page to make it easy to share your memories.

Send flowers to the Bennett family.