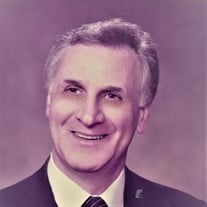 Frank D. Aiello, 89, passed away peacefully on July 17, 2020 in his home in Naples FL. He was born in Herkimer NY, the son of Joseph and Maria Stella Aiello. Upon his retirement in 1991, he and his wife Margaret moved to Naples. Frank graduated from Herkimer High School in 1948 and was then drafted into the U.S. Army. He served in the Korean War from 1950-1953 as a member of the 25th Infantry and a rifleman of the 27th regiment. Upon his return, Frank resumed his place in the family business as President of Aiello’s Super Food Market. He also had an active real estate license in NY and was President of the Joseph Aiello Realty Corp. On January 2, 1956 Frank united in marriage with Margaret D. Trivieri and shared a loving union of 59 years, until her passing in February 2015. They had five children Jennifer, Francine (preceded in death), Mary Carol, Frank Jr and Donna. Frank lived a life of contribution, giving his time and talent to grow and build many organizations in his community. He was an active member of St. Anthony’s Catholic Church in Herkimer, starting as an altar boy. He also was a founder and member of the St Anthony’s Glee club until moving to Naples. Frank was a past President and Paul Harris Fellow of the Rotary. One of Frank’s passions was the Boy Scouts of America where he was a past President and served as the Council’s finance chairman and treasurer for the County. Frank achieved the Silver Antelope and the Silver Beaver and the esteemed St George award for scouting. Frank also served as the Chairman of the Board of Central New York Heart Association. He served as past President of the Mohawk Valley grocers Association Inc, past President and Chairman of the local United Fund. Frank also served on the Village advisory board and held a seat on the Herkimer County Board of Education. One of Frank’s most impactful achievements was the initiation and establishment of MOVAC, a much-needed ambulance service for Herkimer County. After retiring to Naples, Frank and Margaret became active and supporting members of St. Elizabeth Seton Catholic Church. Frank’s love of golf led him to take a job at The Vineyards Country Club of Naples as a starter, a position he held for 29 years. He whistled his way around the course greeting fellow golf enthusiasts. An avid golfer, Frank shot a 77 when he was 80 years old. Frank is survived by his children Jennifer Aiello Milligan and her husband Brian, Mary Carol Aiello and her husband Stephen Brockett, Frank Aiello Jr and his wife Carla, Donna Aiello and his grandchildren Tyler Milligan, Danielle Gisonni and husband Chris, Giovanna Aiello, Frank Aiello III, Montana Aiello, Dylan Aiello and one great grandson, Frank T Gisonni; also a brother James Aiello. Frank was predeceased by his daughter Francine Aiello. A funeral mass will be held at St Elizabeth Seton on Thursday July 30, 2020 at 9 A.M. He will be laid to rest at Sarasota National Cemetery, next to his wife Margaret. Due to COVID-19 there are no calling hours. A Celebration of Life will be held at a date to be determined. Frank was a devoted Husband, Father, Grandfather, Great-Grandfather and a dear friend to many. But most of all, he was the rock of our Family and is greatly missed. In lieu of flowers the family asks that donations be made in Frank’s memory to: Harry Chapin Food Bank of Southwest Florida 3760 Fowler St, Ft Myers FL 33901 Memorial donations may also be made online at www.harrychapinfoodbank.org

Frank D. Aiello, 89, passed away peacefully on July 17, 2020 in his home in Naples FL. He was born in Herkimer NY, the son of Joseph and Maria Stella Aiello. Upon his retirement in 1991, he and his wife Margaret moved to Naples. Frank graduated... View Obituary & Service Information

The family of Frank D. Aiello created this Life Tributes page to make it easy to share your memories.

Send flowers to the Aiello family.