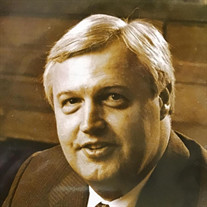 Douglas T. Noakes, Jr, passed away peacefully at home, with his family by his side, on Wednesday, April 7, 2021. He was preceded in death by his parents, D. Inez (Johnson) and Douglas T. Noakes, Sr. Doug was born in New Rochelle New York, later graduating from Notre Dame High School in Easton, PA where he was a standout basketball player. He briefly studied and played basketball at Seton Hall before transferring to The Pennsylvania State University where he met his beloved wife of nearly 52 years, Sheila (Burkett). He pursued his graduate work at DePaul University in Chicago. Ambitious and bright, Doug enjoyed a fulfilling, 30+ year career in the residential home building industry. His start in the industry came at Centex Homes, where he worked for several years before being recruited as the President and CEO of Capital Homes and the Senior Vice President of its parent company, The National Corporation for Housing Partnerships. He later spent 10 years with Winchester Homes, a subsidiary of Weyerhaeuser Company as their President and CEO. His next assignment was the President, CEO, Director and Chairman of the Executive committee at Calton, Inc. a publicly owned (AMEX) company based in New Jersey. He was later brought into Rocky Gorge Homes as the President, COO and a director to complete a financial restructuring and recapitalization to position the company for profit and growth. After successful completion, Doug moved to Hylton Group to close out his corporate career as the CEO. Ready to put his talent and experience to different use, he transitioned to consulting and worked with a number of home building clients across the country to fine tune their operations and position their organizations for growth. Doug was a past director of the Suburban Maryland Building Industry Association and the Northern Virginia Building Industry Association. He was also a member of the Mount Nittany Society and an emeritus member of the Liberal Arts Development Council at the Pennsylvania State University where he and his wife have endowed a graduate fellowship in the College of Liberal Arts. Doug had the opportunity to travel broadly and most enjoyed cruising with friends. He also enjoyed golfing, scuba diving and the arts. He is survived by his wife of 51 years, Sheila (Burkett) Noakes, daughter, Christen (Matthew) Vinnola and their sons, Zachary and Dominic, and son, Douglas (Eileen)Noakes and their sons, Douglas and Tristan; along with siblings Geoffrey (Josephine) Noakes of Wisconsin and Stephanie Noakes of Vermont. The family would like to thank all the staff and caregivers at Safe Homecare and Always There Homecare who assisted Doug and our family over the last year. A special thank you to Avow Hospice and especially Doug’s nurse Cassie who was there for him in his final months. A celebration of Doug’s life is being planned for a future date. In lieu of flowers, memorials may be made in Doug’s name to AVOW Hospice Care Services, 1095 Whippoorwill Lane, Naples, FL 34105.

Douglas T. Noakes, Jr, passed away peacefully at home, with his family by his side, on Wednesday, April 7, 2021. He was preceded in death by his parents, D. Inez (Johnson) and Douglas T. Noakes, Sr. Doug was born in New Rochelle New York,... View Obituary & Service Information

The family of Douglas Noakes created this Life Tributes page to make it easy to share your memories.

Douglas T. Noakes, Jr, passed away peacefully at home, with his...

Send flowers to the Noakes family.