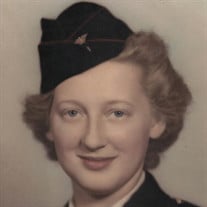 Doris Louise Bender (nee Carpenter) passed away peacefully at the age of 103 on Sunday, February 6, 2022, in Naples, Florida. She was preceded in death by her loving husband George Gus Bender, her parents Harry and Katherine Carpenter, her older sister Marie Carpenter Felts, and younger brother Paul Carpenter. Doris was born in 1918 and grew up on a farm in Verona, New York. She often spoke about getting up before dawn to milk the cows and tend to family farm chores before going to a one-room schoolhouse. She later attended nursing school and headed to California where she joined the Army and met George Bender, also in the military. Theirs was a 3-week World War II romance that lasted over 56 years until George’s death in 1998. Shortly after their marriage in 1942, George was stationed in the Aleutian Islands and Doris, a lieutenant in the Army Nurse Corps, was stationed in Australia and field hospitals in New Guinea for several years. Reunited after the war, they spent Army life in various locations in the United States, Japan, and Africa until George retired from the military and the family moved to Naples, where they have lived since 1957.Doris worked as a nurse and schoolteacher’s aide in Naples and lived a quiet life raising two boys and enjoying her many craft hobbies of macrame, needlepoint, and stained glass. Doris leaves behind her two loving sons, Robert P Bender (Margaret) and Ronald G Bender (Michele); four grandchildren, David A Bender (Rachael), Stephen M Bender, Matthew J Bender (Amie), Robert J Bender (Bethany); and three great-grandchildren, Leila Bender, Emily Bender, and Theodore Bender, as well as numerous nieces and nephews who will all miss her gentle ways and loving heart. The Bender Family wishes to thank The Inn at Aston Gardens, Avow Hospice of Naples, and the Beachwood Society staff for their compassion and professionalism during this time. Doris will rest in peace, alongside her husband George, in the Columbarium in Arlington National Cemetery in Washington, D.C. No services are planned. In lieu of flowers, donations in memory of Doris may to be made to Avow Hospice, 1095 Whippoorwill Ln, Naples, FL 34105.

Doris Louise Bender (nee Carpenter) passed away peacefully at the age of 103 on Sunday, February 6, 2022, in Naples, Florida. She was preceded in death by her loving husband George Gus Bender, her parents Harry and Katherine Carpenter, her older... View Obituary & Service Information

The family of Doris L Bender created this Life Tributes page to make it easy to share your memories.

Send flowers to the Bender family.