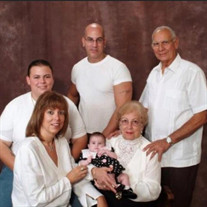 Dalva Diaz – as she was always called by everyone; especially her loving husband, was born on December 30th, 1929 in Banes, Holguin, Cuba. She was the fifth of 10 siblings born to Fausto Diaz Cabrera and Maria Cuesta Chacon and was a “second mother” to her younger siblings. Dalva was a devoted, daughter, sister, wife, mother, aunt, grandmother “YEYA” and more recently, promoted to Great Grandmother status. She was loved by all who knew her and enjoyed her infectious laugh. Devastated by the turn of events in Cuba, she left her beloved family for Philadelphia, PA, in 1960, in order to help provide for them after the Cuban revolution. She resided with her sister, Eloisa (Mimimi) and her niece, Maria del Carmen (Nini) until she met and married the love of her life Fernando Pifferrer. They married on February 15, 1964 and promptly started a family in their new homeland. She and Fernando proudly became citizens of the United States in gratitude for what their new homeland offered - FREEDOM! Life wasn’t easy but she made the most of it. Together, Dalva and Fernando danced and laughed at every opportunity; but she never forgot her homeland and she worked feverishly to provide for her family, as well as her “Cuban Family”. A naturally talented seamstress, she sewed and crocheted many a piece of artwork for family and friends. Some that withstood the test of time and were most recently worn by her grand-daughter and great grand-daughter. She was the original Diva! Her hands were always nicely manicured. She always dressed nicely and loved to have those matching shoes and purses. We teasingly called her “Imelda” because of the number of shoes she collected. She worked in the garment industry as a seamstress for several design houses including: Botany 500, Hickey Freeman and Alfred Angelo. She retired from that industry in 1995. Dalva was an amazing cook and baker; able to whip up the most sumptuous Cuban culinary delights that her family and friends enjoyed. Dalva always said I love you with her cooking. She migrated to Naples, FL in 2000 and enjoyed the warm weather, playing dominos on the lanai and spending time at the beach with her family. She was preceded in death by her parents, several siblings, an unborn child (1971) and her dotingly devoted husband, Fernando (2013). She is survived by: her daughter, Barbara Maria Cabrera (Victoria), son Fausto Antonio Pifferrer (Reuben); by her grandchildren: Christopher (Jennifer) Cabrera and Sophia Victoria Bell-Pifferrer, by: her great-grandchildren Roman Oliver Cabrera and Lydia Grace Cabrera. She is also survived by her two sisters: Raquel Diaz Esteve, Maritza Diaz Cuesta and her brother Ramon Diaz Cuesta, as well as their spouses and her many nieces and nephews. A celebration of life will be held at a later time this year when her entire family can reunite and celebrate a life well lived. As per her wishes she will be interred with her family and husband in Banes, Holguin, Cuba.

Dalva Diaz &#8211; as she was always called by everyone; especially her loving husband, was born on December 30th, 1929 in Banes, Holguin, Cuba. She was the fifth of 10 siblings born to Fausto Diaz Cabrera and Maria Cuesta Chacon and was a... View Obituary & Service Information

The family of Dalva Pifferrer created this Life Tributes page to make it easy to share your memories.

Dalva Diaz – as she was always called by everyone; especially...

Send flowers to the Pifferrer family.