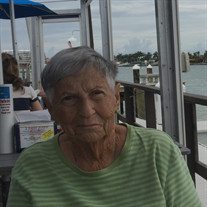 Ditkof, Corinne Shirley (Jaffe), born April 28, 1928 and entered her final resting place on November 7, 2020 at Avow Hospice in Naples, Florida. She is survived by her sons Martin (Carol Hammond), Larry (Carol Ditkof), and Howie (Mary Ditkof), grandchildren John (Cassie Lee) Ditkof, Diana Ditkof (long term boyfriend Alex Caputo), Julie (Aaron) Mansfield, Mark (Khannah) Ditkof, Benjamin (Laurel) Ditkof, and Mitchell (Britany) Ditkof, and great grandchildren Shane and Cole Ditkof. She was also the biological grandmother to David, Adam, and Chad Huisman. She was predeceased by her loving husband Frederick in 1981, son Michael in 1955, and son Scott in 2020. Corky, as she was affectionately known by her friends, lived life with a flare. She was born in Kankakee, IL, went to college at the University of Illinois, graduating with a degree in journalism, worked as an inside agent for Liberty Mutual, and met her husband on a blind date in Chicago. They were married in 1953. While her husband was alive, they resided primarily first in Park Forest, IL and then Grand Rapids, MI. While living in Grand Rapids, she was active in the Oral Deaf School including writing a monthly newsletter and writing several musical Christmas shows for the school. She travelled the world in support of her nature photography and for many years was a fixture in the Naples Art Fairs enjoying meeting people and telling the story behind each photo in her ever-growing portfolio. She was also a docent at the Butterfly Exhibit at the Naples Zoo where she very much enjoyed entertaining visitors with her stories. She could often be found on Old 41, Corkscrew, the Ranch, or a number of other nature trails with friends Diane and Grace where they would enjoy experiencing and photographing nature. Her hobbies over the years included playing golf, painting and selling golf tees and ball markers, painting, making artificial flowers, and many other arts and crafts. The proverb of a rolling stone gathering no moss fits her very well. Corky will be missed by many for years to come. In lieu of flowers, please donate to a charity of your choice.

The family of Corinne Shirley Ditkof created this Life Tributes page to make it easy to share your memories.

Send flowers to the Ditkof family.