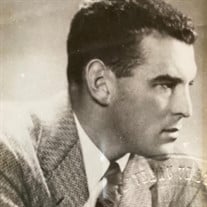 Dr. Charles M. Karpas, a longtime Naples resident who served for more than three decades as Director of Pathology at Naples Community Hospital, died September 14 at the Premier Place Health Center at the Glenview Pelican Bay. He was 96. The son of Carl J. and Elsie (Burrell) Karpas, Chuck Karpas was born in New York, NY on April 25, 1924, the second of three children. In 1942, he started classes at the University of Miami, where he was a member of the Sigma Chi Fraternity, but his studies were soon interrupted by service in the Second World War as he enlisted in the U.S. Navy in October of that year. He served for four years, rising to the rank of Lieutenant Senior Grade and becoming one of the youngest captains of a 300-foot Landing Ship Tank (LST). His wartime travels took him to Russia, the Philippines, Okinawa and Iwo Jima. At the end of the war he was honored with the Asiatic Pacific Medal, the WWII Victory Medal, the Navy Unit Commendation and a Presidential Citation. Upon discharge, Chuck Karpas earned his undergraduate degree from Hobart College, where he excelled as a basketball all-time letter winner. He then attended New York Medical College, earning his medical degree in 1952 and specializing in anatomic and clinical pathology. While attending New York Medical College, he was often asked to provide emergency medical help at the nearby New York Athletic Club. Subsequently, he was asked to become a member of the club’s Heisman Trophy Committee, a role he enjoyed for many years. An athlete in his own right, he enjoyed sailing and running in marathons. Beginning with residencies at Baylor University Medical Center and the University of Miami, followed by medical practice in New York, Fort Lauderdale and Naples, Dr. Karpas’s career spanned nearly 70 years. He co-authored numerous scholarly papers. After marrying the former Linda Cheng in 1977, the newlyweds relocated to Naples, where Chuck became Director of Pathology at Naples Community Hospital, a position he held until his retirement more than 30 years later. He and Linda were avid worldwide travelers, visiting every continent, but they had a special affinity for Paris, which they visited every December for many years. A lifelong philanthropist , Dr. Karpas originated the Winged Foot Program of Collier County, a scholarship award program for athletes that emulated the spirit of the Heisman Trophy. Supporting excellence in high school athletics coupled with academic achievement, this program has been annually awarded to Scholar Athletes for more than 30 years and will continue in the years to come. Dr. Karpas was also a benefactor to the University of Miami Athletic Program and Wilmington College in Ohio, where his wife Linda was educated. He also generously supported Trinity-bythe-Cove Episcopal Church. Dr. Karpas was a lifelong member of the New York Athletic Club and a former member at the Ridgewood Country Club in Ridgewood, N.J. and the Metropolitan Club in New York, N.Y. For more than thirty years in the fall he could be found with friends on the fifty yard line at University of Miami football games. Linda Karpas’s death preceded her husband’s. Chuck Karpas is survived by his sister, Frances Karpas Newman of Greenwich, CT; a nephew, Bruce Newman of Deep River, CT; and two nieces, Pamela Newman Pooley of North Salem, NY and Jennifer Yu of New York, NY. In lieu of flowers, the family encourages contributions to the Winged Foot Scholarship Foundation, 1395 Panther Lane, Naples, FL 34109.

Dr. Charles M. Karpas, a longtime Naples resident who served for more than three decades as Director of Pathology at Naples Community Hospital, died September 14 at the Premier Place Health Center at the Glenview Pelican Bay. He was 96. The... View Obituary & Service Information

The family of Charles Karpas created this Life Tributes page to make it easy to share your memories.

Send flowers to the Karpas family.