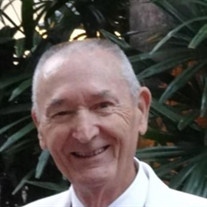 Charles “Chuck” Gomori (“the Nice Guy”) passed away peacefully at home in Naples, FL on the morning of Sunday, June 13, 2021. He was born to John and Helen (Grebecz) Gomori in Port Colborne, Canada on November 25, 1931. The family moved to Windsor, Canada and later to Detroit, Michigan. Chuck graduated from Wayne State College (University) with a B.S. in Education for Health and P.E. He met the love of his life, Dorothy Oswald, in Detroit in 1952 and they were married in June 1954. Chuck became a naturalized citizen and honorably served his new country in the U.S. Army. Chuck started his career with the YMCA in Detroit, MI and they later moved to Mentor, Ohio to further his Y career at the Lake County YMCAs under his mentor, Lynn Russell’s, guidance. During his tenure they added the 4th branch, the Outdoor Family Center in Perry. Chuck retired from the Y in 1992 as the Executive Director of the Lake County YMCA. Chuck and Dorothy were involved at the Willoughby United Methodist Church in Ohio. He was “Chuck the Chef” at WUMC, cooking many pancake breakfasts and Lenten dinners with the men’s group. He was also an usher for many years. After retiring Chuck and Dorothy enjoyed “snowbirding” before making their move to Naples in 1996. Chuck resumed his ushering role and served as Head Usher Coordinator at First Presbyterian Church of Naples for 17 years until retiring last year. Chuck was preceded in death by his parents, his stepmother Margaret (Divak) Gomori, his brother Barney (Shirley) Gomori, and his son-in-law Les (Karen) Johns. He is survived by his wife of 67 years, Dorothy Gomori, daughters Karen (Kenneth) Martin and Cindy Gomori, sister-in-law Shirley (Barney) Gomori, sister-in-law Evelyn (William) Bailey, as well as many nieces and nephews and their families. Chuck enjoyed his desserts, RVing, golfing, watching sports, getting together with friends, and spending time with his family. He and Dorothy enjoyed traveling in the U.S., Canada, Europe, Australia, and New Zealand. Chuck attended the Olympics in Tokyo in 1964 and in Mexico City in 1968 while acting as a delegate to the two World Consultations on Health and Physical Education. A celebration of life will be held on July 27th at 11:30am at the First Presbyterian Church of Naples, 250 Sixth Street South, Naples, FL 34102. In lieu of flowers please donate to the Unrestricted Endowment Fund of the Lake County YMCA, 933 Mentor Ave, Painesville, OH 44077 or First Presbyterian Church of Naples, 250 Sixth Street South, Naples, FL 34102 or a charity of your choice.

The family of Charles Gomori created this Life Tributes page to make it easy to share your memories.

Send flowers to the Gomori family.