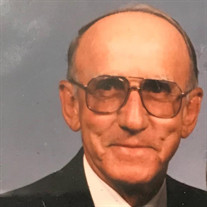 Carrol Wharton Batten, 94, of Naples, Fla. and formerly of Somerset, Ohio, died peacefully on July 4, 2021. He was the only child of Bernice (Wharton) Batten and Arthur Batten. Raised in Summerfield, Ohio, he worked in his family's feed store while attending Summerfield High School, where he was the 1944 class salutatorian and a standout basketball player. He joined the U.S. Navy during World War II and volunteered for the dangerous duty of going ashore with U.S. Marines to act as a radioman during the anticipated invasion of the Japanese mainland, an invasion that never happened. He would joke in later years that he didn't recall "volunteering" for that mission. After the war, he worked for the Texas Eastern Transmission Company, manning a pipeline that sent natural gas from Texas to the cities of the eastern seaboard. During a career that spanned some 35 years, he rose to the level of station chief, overseeing the operation of the pipeline pump station at Somerset. He was blessed to have had three wonderful women in his life: His first wife, Reva (Swank) Batten, to whom he was married for almost 50 years, preceded him in death in 1998. His second wife, Betty (Helser) Batten, with whom he spent many happy years of retirement splitting time between Ohio and in Bradenton, Fla., passed away in 2017. And Roma (Kuhn) Paige. His high school sweetheart, they were separated at first by the war and then by a lifetime of intervening circumstances. They reunited late in life and took great pleasure in visiting in person and over the phone, chatting happily as if the long time apart never happened. He was an avid follower of the Ohio State Buckeyes, Cleveland Indians and especially of the Big Red Machine baseball team of the 1970s. A loving and supportive father, he would drive his son and carloads of Little League teammates three hours to Cincinnati to see the Reds in person. Carrol loved golfing and fishing in the rolling hills of Southeastern Ohio and later in the warmth of Florida's Gulf Coast. He was an accomplished woodworker and enjoyed making lamps, clock, cabinets and other items to give as gifts. He considered himself fortunate to travel the country with his two wives, seeing nearly every state in the process. He caught his share of fish in Canada, too. He is survived by a son, Brent (Michelle) Batten of Naples, a grandson, Zachary Batten, three step-daughters and several nieces, nephews and cousins. Private graveside services at Eastern Cemetery in Summerfield, Ohio will be arranged at a later date. In lieu of flowers, the family suggests memorial contributions to Vitas Hospice of Naples.

Carrol Wharton Batten, 94, of Naples, Fla. and formerly of Somerset, Ohio, died peacefully on July 4, 2021. He was the only child of Bernice (Wharton) Batten and Arthur Batten. Raised in Summerfield, Ohio, he worked in his family's feed store... View Obituary & Service Information

The family of Carrol Batten created this Life Tributes page to make it easy to share your memories.

Carrol Wharton Batten, 94, of Naples, Fla. and formerly of Somerset,...

Send flowers to the Batten family.