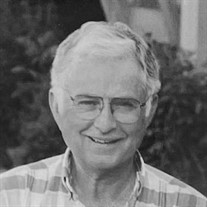 Bernon Willis Young, 90, of Naples Florida peacefully passed away on November 24, 2021 surrounded by family. He is survived by his wife Bette, three children: Catharine Young of Estero, Michael Young of Salt Lake City and Sarah McCarren (Donald) of Estero and four grandchildren. Megan Young and Kate Prestwick (Brayden) of Salt Lake City, Connor McCarren of Philadelphia, and Shannon Pope (John) of Nashville. Bernie was born to Lucile and Willis Young in Brighton, Michigan where he spent his early childhood. Always an athlete, he earned 12 varsity letters in high school, graduating from Rockford High School in 1949. He achieved Eagle Scout status as a young man. Bernie attended Michigan State University and played the trumpet in the Spartan marching and concert bands. In the middle of his college career, he was drafted into the Navy where he earned the “Spirit of Youth” award at boot camp. When he returned to MSU, he met the love of his life, Bette Buttery. After their marriage in 1954, Bernie and Bette moved from Lansing to Statesville, NC and then to Sheboygan WI. The family finally settled back in Rockford when they bought his father’s insurance agency, Young Insurance. He also worked as a stockbroker and land developer. Always community minded, Bernie built senior’s housing, served as the planning commission chair, and participated in numerous civic organizations. Rockford honored him by having a “Bernie Young Day” and naming him an “outstanding resident”. The “newly retired” couple moved to Naples in 1983 where they started their community work yet again. Being one of the first residents in Pelican Bay, Bernie helped form the HOA and served as the first president of the Foundation. He also served as the president of the Greater Naples Civic Association. Bernie’s love of music called him to serve on the music committee of the Naples United Church of Christ. In 2010, Bette and Bernie moved to Moorings Park while maintaining many of their Naples activities and adding to the many they called friends. Bernie was passionate for golf, researching his genealogy (Member of the Mayflower Society), and socializing with many dear friends. He cherished frequent beach and Silver Lake visits from children, grandchildren and granddogs. Most of all, he adored his wife who shared 67 years of love and many, many blessings. A Celebration of Life will be held at Naples United Church of Christ on January 22, 2022 at 11am. In lieu of flowers, donations will be accepted for Naples UCC, Music Fund: 5200 Crayton Rd. Naples, Fl 34103 or Moorings Park Foundation: 120 Mooring Park Dr., Naples, Fl 34105.

The family of Bernon Willis Young created this Life Tributes page to make it easy to share your memories.

Send flowers to the Young family.